THE POST-COVID GLOBALISATION PROCESS: WHAT WILL THE POST-PANDEMIC FUTURE HOLD?

Expo Riva Schuh & Gardabags have added a new event to the platform with the fifth Live Talk, entitled ‘The post-Covid globalisation process,’ led by the fashion economist, Enrico Cietta, together with Joao Maia, General Manager of APICCAPS and Elisabetta Mantese, Manager of Euler Hermes Italy.

The advent of Covid-19 has marked a 'before' and 'after' in the lives of every one of us, changing our daily life, our social and shopping habits and destabilising the entire global economy. Its effects on the fashion industry, and the footwear industry in particular, and above all the strategies to restart in the post-pandemic period were at the core of the Live Talk held on March 25th, led by Enrico Cietta, Fashion Economist & CEO of Diomedea with the participation of Joao Maia, General Manager of APICCAPS, and Elisabetta Mantese, Manager of Euler Hermes Italy.

The talk was opened with the symbolic and absolutely topical image of the Evergreen company’s container ship - one of the largest shipping companies in the world - stranded in the Suez Canal and causing a traffic jam capable of blocking one of the main crossroads of world trade by sea. Likewise, the pandemic we are experiencing - underlined Cietta - was a 'shock' outside of the economic system, unlike other serious economic crises of the past such as those of 2001 or 2008, but with an effect that nevertheless has been capable of causing paralysis of the entire world market. Furthermore - continued Cietta - in the past, the crises have had a greater impact on certain specific economic variables, and then spread like wildfire to the entire global economy, whereas in the case of Covid-19, the crisis has directly impacted the globalisation process, with destabilising effects on world economies, but this has not happened equally in all the countries involved.

We’re all involved, but not all in the same way

This asymmetry of the effects of the pandemic in the world was also confirmed by Joao Maia, who reports how - according to a study conducted by APICCAPS with experts in the footwear and fashion industry from all over the world - Asia already started showing signs of recovery in 2020 in the confidence indicator of the evolution of consumption, with China as the only country with a positive GDP growth sign as early as autumn 2020. The same cannot be said, however, of Europe, whose indicators are still negative in 2021, while the US shows a fluctuating trend. Furthermore, on a global level, the APICCAPS study highlights how the pandemic initially impacted more strongly on traders than on manufacturers, due to the forced closures of shops, but already, as early as  the autumn of 2020, traders showed signs of a higher recovery compared to the manufacturing companies, and these signals have continued into 2021.

Considering instead the impact of the post-pandemic crisis on price trends, the lockdown mechanism that characterised the first phase of the pandemic, saw an attempt to facilitate the sale of products already in stock as an immediate reaction, with special sales and reduced prices. Now, almost a year later, a recovery in the increase in product prices is expected, especially in North America, with a driving effect on the rest of the global market. This rise in prices in the US is essentially linked to the policies of increasing tariffs, implemented by the Trump government, on products from China but also to the problems of the stars and stripes port logistics with consequences on the entire value chain, including raw materials. However, Maia says, if we consider a longer period of time, and the return to a pre-Covid situation, prices linked to the increase in logistics costs should also fall and return to more contained levels, while wages will continue to rise, both in the US and in Europe.

A 'time bomb' on the insolvency front

Elisabetta Mantese addressed the issue of the credit insurance market, from which it emerges that in Europe there is a situation of serious cash flow crisis on the part of companies, which affected countries such as France and Spain in particular in the first phase of lockdown. Insolvencies on the part of creditors and credit insurance systems have put many companies in serious difficulty, especially in the Old Continent. 24% of European companies still risk a cash flow crisis today and an economic recovery is not expected before 2022. The reaction of the production and distribution system will depend, above all, on the speed of diffusion of vaccines and on the compensatory measures implemented by the various Governments, with forms of direct contributions and deferrals in the collection of taxes, and prospects of a return to a pre-Covid economy not before 2023. The fashion sector, which suffered a drop in turnover of more than 50% following the first lockdown, saw clothing retailers suffer most of all (- 90% in some European countries). This segment also witnessed the weakest recovery in the remainder of the post lockdown period, with losses still standing at -20% compared to the pandemic period. On the other hand, large chains and department stores of clothing and footwear reacted better, as did luxury products and sportswear. In any event, the pandemic has had a strong psychological impact on the consumer, who has profoundly changed his/her consumption behaviour, hitting the fashion sector hard. About 6% of fashion companies are believed to be in danger of disappearing by the end of 2021 if the situation does not change.

Then there is a real 'time bomb' on the insolvency front. In fact, even if the insolvency index appears to be strongly influenced by the emergency policies and by the reopening or closure strategies adopted by the various countries, this has nevertheless reached, globally, a new record in 2020 of +45% compared to to 2019. The countries most affected by the risk of insolvency are the USA with + 57% in 2020 compared to 2019, followed by Brazil (+ 45%), China (+ 40%) and most European countries, all between + 25% and + 45%, as in the case of the United Kingdom.

The effects of the pandemic on retail channels

The APICCAPS studies show that the pandemic has not had the same effects on all of the different distribution channels. Naturally, the entire online sector has gained from the various lockdowns and partial closures, but the general online stores such as Amazon and Ebay have grown the most, followed by multi-brand footwear or fashion stores such as Zalando or Farfetch, as well as own brand retail stores, whereas physical stores have suffered the greatest losses. Still keeping within the physical retail sector, large scale stores have been able to react better to the post-pandemic crisis, while footwear multi-brand and, above all, single-brand stores, have seen a sharp decline in business, recording -30%. This is probably because when we talk about large-scale retail stores, such as hypermarkets and supermarkets, we consider places where people go to buy basic necessities and then, if there is an opportunity, they also buy fashion items and accessories. The own brand stores, on the other hand, are often places where the consumer goes to seek a shopping experience, to then buy the goods online ... for example, the Apple Stores, where the consumer goes to live a 'shopping experience' and to see and touch the product, which he or she then buys on the Internet.

Maia believes, however, that once the pandemic is over, physical stores will be able to catch up, remaining a viable alternative to online shopping (which in any case will no longer be questioned because it represents the 'new normal'). Indeed, the physical store allows you to give the consumer things that the online alternative cannot offer, such as the possibility of seeing the product firsthand and touching it. But it is essential to convey a strong brand image that is able to offer to the consumer an effective 'shopping experience' in an increasingly integrated perspective of all sales channels.

As Cietta underlines, the most important factor is the digital relationship that the brand establishes with the consumer, and this goes beyond the channels that the brand uses to reach him or her. And this is not necessarily an online platform, but could also be instagram or Whatsapp.

The APICCAPS study shows that the factors that guided footwear consumption in 2020, in addition to price, were not so much fashion trends, but sustainability. And sustainability will be increasingly at the core of consumer choices in the future. It is interesting, however, to note that consumers declare themselves willing to pay around 4% more for footwear made from recycled materials, as well as for domestic products, while they appear willing to pay up to 8% more for a product with a longer lifespan and will even pay 9% more for a customised shoe. On the other hand, online shopping and home delivery justify only a 3% price increase.

In general, formal and elegant footwear, as well as those for special occasions and ceremonies, paid the highest price for the consequences of the crisis, whereas casual, outdoor and sports footwear showed greater resilience.

Trying to make predictions, the coming months still appear very critical and the economic trend in 2021 will depend on how the epidemic will be kept under control, the spread of vaccines and how much state aid can buffer the negative effects of limitations and closures and the speed of recovery of companies. However, there is a strong fear of a 'domino effect' linked to late payments and insolvencies, with a suffering caused by companies’ cash flow that might reverberate in a chain on the entire economy. In this scenario, all companies are at risk, not only small and medium-sized ones, especially in the context of a globalised economy where the value chain is strongly interconnected. Monitoring cash flow and adopting Trade credit insurance solutions can be useful strategies to protect companies from the risk of insolvency and default. However, there is the risk of an economy dominated by a few large players, where the strong are becoming stronger and the weak are at risk of disappearing. Data from the APICCAPS study referring to global footwear consumption shows a recovery starting from 2021, but following a rather slow process. "For the first time since I joined APICCAPS, and we are talking about two decades - says Maia - I have noticed that there is a group of winners and a group of losers ... companies that have greatly increased their sales, and others that have lost and lost again.”

In the near future - concludes Maia - there will be companies capable of growing considerably, especially those operating in the casual and sports sector, with a strong brand image and an effective online presence, and especially in the Chinese market which is growing rapidly at the moment. These are the key factors. It is no longer a question of price: you can lose turnover even with an inexpensive product and on the contrary see an increase in sales in the luxury sector. 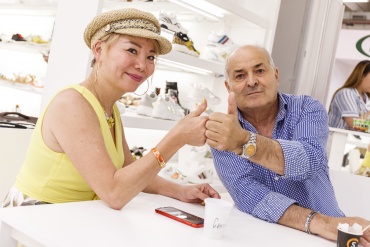