COVID AND EXHIBITIONS: THE PRESENT & THE FUTURE

What will the post-pandemic trade fair be like? What has changed and what is likely to stay the same? Scenarios, solutions and ideas give an insight into the state of the industry and identify the future directions for the footwear sector.

While there is no doubt that the outbreak of the health emergency has totally changed the economy of society, and the exhibition sector in particular, it is equally true that it has accelerated the already existing process of change in which the (winning) contamination between real and digital as one of its fundamental characteristics is revealed.

But is it possible that a sector which, by its very essence, sees its business defined by reality, can move in the opposite direction without distorting itself, and, on the contrary, can continue to make its vital dynamics a strong point?  What will the future of the trade fair and its related events be after the Covid era? The answer makes for a very interesting discussion in a talk offered by Expo Riva Schuh on ‘The role of B2B events in the post-Covid supply chain,’ which aimed to provide a range of different scenarios, thanks to the input from important players in this industry.

So what came out of it? Without a doubt, the fact that the new format, designed in an all-digital way, is destined to remain a constant in the exhibition world in the omni-channel sense, and that paying attention to the community needs to remain a priority, offering meetings and ongoing relationships that are not strictly limited to the days of the event itself. Yet naturally, without ever losing sight of the importance of the product. According to Tommaso Cancellara, CEO of Micam and General  Manager of Assocalzaturifici, there will be three macro trends that will constitute the drivers for success in the coming years: technology – from the use of blockchains to 4.0 industry; the continually evolving Asia Pacific market and all-round sustainability. The latter also turned out to be the real discriminating factor concerning the main target audience of the current market – the so-called Z-generation – who consider it an essential asset.

However, there is no doubt that the drop in turnover was also significantly felt in the exhibition sector with double-digit losses that affected both the volumes produced and those exported and where the timid recovery in September was virtually cancelled out by the second pandemic phase. If there is a solution, as Siro Badon, chairman of Assocalzaturifici pointed out in his talk, then it must be identified, in the case of the footwear sector, in its endemic excellence, namely innovation, the quality of processes and sustainability. And, it goes without saying, in digitisation.

Indeed, the digital platform created by Expo Riva Schuh for the latest edition was able to make the difference for a sector, which, penalised by the emergency and lacking government support, was able, despite everything, to react by focusing on a digital revolution that, from training to business, avoided running into an even more serious situation. But the entire footwear supply chain requires support, particularly by virtue of its strategic importance for the Italian economy. This thought is shared by all, and about which Lino Mattiozzi, Chairman of Assoprov, spoke with hope. The hope of returning as soon as possible to the classic trade fair formula where the glocal aspect is predominant, and for which the Riva del Garda event is well-known, more important now than ever before. 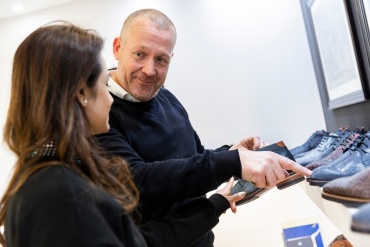